Gulf War Panel: We’re Being Purged for Contradicting the VA 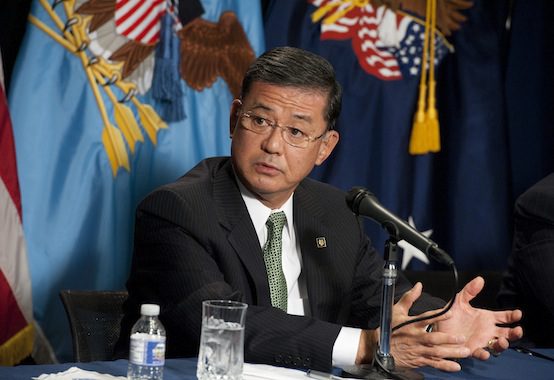 Secretary of Defense / Flickr
Members of a heretofore independent panel on Gulf War Illness are accusing Veterans Affairs Secretary Eric Shinseki of “shooting the messenger” by gutting their committee and slashing half its members in a recent charter rewrite.
A member of the Research Advisory Committee (RAC) on Gulf War Illness told The American Conservative over the weekend that Shinseki was retaliating against them for their unvarnished, public criticism of the agency—in the press and on Capitol Hill. Most recently, members Anthony Hardie, a Gulf War veteran and advocate for the estimated 250,000 vets suffering with Gulf War Illness (GWI), and Dr. Lea Steele, a longtime GWI researcher, testified with former VA scientist Steven Coughlin on the Hill. Both RAC members complained that bureaucrats and researchers in the agency were driven by an agenda that preferred viewing GWI as a psychological rather than physical condition.
TAC interviewed Coughlin and Hardie after the hearing. Coughlin said his bosses manipulated and ignored data that did not coincide with their agenda. Hardie concurred, saying that the RAC had been forced to deal with this VA bias for some time and that complaints about it had been ignored. In 2008 for example, the committee released a report saying that GWI was a physical condition caused by toxins, including pesticides and the pills that the soldiers were given to counteract the effects of nerve gas. Since then, committee members have accused the VA of trying to undermine their findings. (The VA’s critics say it is trying to avoid the massive expense of liability, a charge the VA has adamantly denied. Officials have also denied that the VA is trying to push the psychological explanation over the physiological one.)
The damage done to the 15-year-old RAC last month by Shinseki’s hand might forever take the teeth out of the scrappy committee, which is supposed to convene for a regular meeting this week in Washington. The changes to the RAC charter would ax six of its 12 members and replace them “in accordance with VA policy,” according to a letter to RAC chairman James Binns signed by Shinseki’s interim chief of staff, Jose Riojas. The letter was provided to reporter Kelly Kennedy, who wrote about it at USA Today on Friday. The measure also removes Binns—whom the committee called their “principled, fair, just, non-partisan, longstanding champion” of veterans—after a one-year “transition period.” The letter does not identify which other members will have to go.  END_OF_DOCUMENT_TOKEN_TO_BE_REPLACED
The committee has written a lengthy note to Shinseki asking him to restore the charter, which was created by Congress in 1998. The letter was provided to TAC and outlines the charter changes, which aside from slashing the panel membership would put full control of money and staffing into the hands of VA officials. The RAC would no longer be able to hire its own independent personnel but would be staffed by VA people. Independent assessments of the way the VA is handling GWI will be all but impossible now, say committee members.
Worse, such assessments will no longer be necessary under the new charter because the language that charged the panel to “asses the overall effectiveness of government research to answer central questions on the nature, causes, and treatments for health consequences of military service in the Southwest Asia theater of operations during the 1990-91 Gulf War” has been scrapped entirely.
“To say that I’m disappointed in our leadership at the VA would be putting it much too politely,” said retired Marine Corps Capt. David K. Winnett, a Gulf War veteran and activist, who suffers from GWI, in an email to TAC.
“It seems the closer our research efforts have brought us towards finally identifying the physiological damage sustained by 1991 Persian Gulf War veterans, the more the VA seems to want to discount and discredit the work of some of America’s most gifted scientists and medical researchers.”
Hardie said the panelists were blindsided by the changes.
“VA continues to ignore and whitewash this panel’s many recommendations while Gulf War veterans suffer and die. But if that wasn’t bad enough, VA is now going after the very same medical researchers and veterans who did their jobs telling VA what must be fixed,” Hardie told TAC on Saturday.
A VA spokesman told Kennedy the charter changes had been in the works since last fall, well before the March hearing at which Hardie and Steele participated. There was no comment forthcoming on the committee’s complaints about retaliation, aside from a statement provided to Kennedy: “VA recognizes and respects the service and dedication of veterans of the 1990-91 Gulf War and remains committed to working with [RAC] to improve their health and well-being.” Purging and eviscerating their panel will have the opposite effect, members complained in their letter to Shinseki.
Hardie said the panel has CC’d members of Congress who might not be very happy with the changes to the committee they had worked so hard to establish 15 years ago. Meanwhile, Riojas has “inserted himself” into their meeting agenda for today, said Hardie, though, “he has not shared what he intends to discuss, a further lack of transparency.”
Follow @KelleyBVlahos