SUMMARY:  The Department of Veterans Affairs (VA) is amending its adjudication regulations concerning presumptive service connection for medically unexplained chronic multi-symptom illnesses associated with service in the Southwest Asia theater of operations for which there is no record during service.  This amendment is necessary to implement a decision of the Secretary of Veterans Affairs that there is a positive association between service in Southwest Asia during certain periods and the subsequent development of functional gastrointestinal disorders (FGIDs), and to clarify that FGIDs fall within the scope of the existing presumption of service connection for medically unexplained chronic multi-symptom illnesses.  The intended effect of this amendment is to clarify the presumption of service connection for these illnesses based on service in Southwest Asia theater of operations during the Persian Gulf War.

Dates:  Comments must be received by VA on or before December 17, 2010.
Addresses:  Written comments may be submitted through http://www.Regulations.gov.

Detailed information on the committee’s findings may be found at http://www.iom.edu/Reports/2010/Gulf-War-and-Health-Volume-8-Health-Effects-0f-Serving-in-the-Gulf-War.aspx.

The report findings are organized by category and can be found under the heading, “Table of Contents.”

(91outcomes.com) – The presentations made at the last meeting of the Congressionally chartered Research Advisory Committee on Gulf War Veterans’ Illnesses (RAC-GWVI) are now available online for the public.

Due to VA security restrictions, RAC staff currently have to travel to a VA location about an hour away from their work location in order to upload the presentations to the website.

RAC staff are committed to meeting veterans’ needs, and are working with VA staff on a solution that will have the presentations made at RAC meetings publicly available in a timely fashion.

20 Years After the War, DoD at Odds with VA, Institute of Medicine, Science

(91outcomes.com) – Nearly two decades after the war’s end, the U.S. Department of Defense (DoD) continues to tout its research into “stress” for veterans of the 1991 Persian Gulf War, despite years of published research studies, including the by federal VA and the Institute of Medicine, that show otherwise. 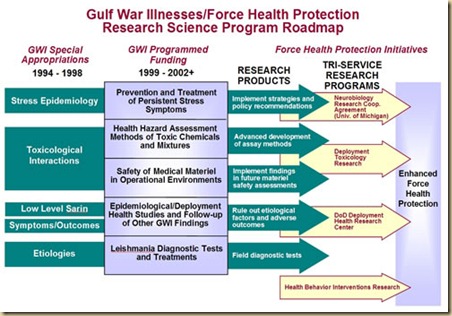 A 2008 report by the Congressionally chartered U.S. Department of Veterans Affairs Research Advisory Committee on Gulf War Veterans’ Illnesses showed that Gulf War illness is real, affects roughly one-fourth to one-third of the 697,000 veterans of the war, and is likely the result of exposures to a combination of chemicals.

And, a 2010 report by the Institute of Medicine, part of the National Academy of Sciences, showed that 250,000 Gulf War veterans remain ill and disabled as the result of chronic multi-symptom illness that is unrelated to any psychiatric or psychological disorders.

The DoD’s webpage shows the following, proudly proclaiming many years of research into “stress” as a cause of Gulf War veterans’ chronic multi-symptom illnesses.

It is widely recognized the stress can aggravate physical health conditions.  However, more than two decades of peer reviewed scientific research recognized by the IOM and the federal VA in their voluminous reports have shown that stress is, at most, an aggravating factor for complex and chronic multi-system, multi-symptom illnesses that continue to afflict and disable roughly one-third of the veterans who served in the Gulf War two decades ago.

It is unclear why that DoD remains at odds with the conclusions of science, the Institute of Medicine, and the federal VA tasked with aiding and assisting veterans of past and current wars.

(910utcomes.com) – Today Philadelphia radio talk show host Chris Moore will host me (Anthony Hardie) during an hour-long talk show focused on Gulf War veterans and helping to spread the word about 91outcomes.com and veteran-driven efforts to help other veterans.

Veterans Day: We Remember Our Own – the Living, and those who Lived Among Us

Dan Devlin was my unit commander, and a good man.  We lost him earlier this year.  Thanks to Joel for posting this picture to our BSBC page.   -Anthony Hardie

Veteran Suicide: A Must Watch Video 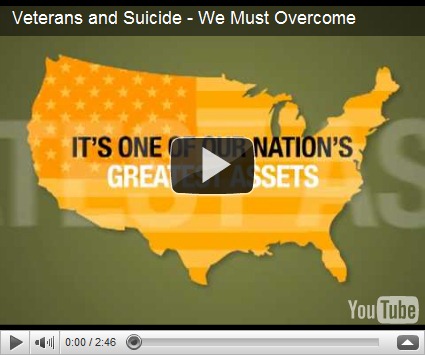 (Boston, Mass. – Boston University) -- Some of the wounds of war are invisible to the untrained eye: traumatic brain injuries, post-traumatic stress disorder, and illnesses traced to chemical exposures, to name a few.

These injuries, which affect hundreds of thousands of veterans of the first Gulf War and the ongoing wars in Iraq and Afghanistan, have been compounded by delays and controversy in recognizing, treating and compensating the veterans who suffer from them, according to Boston University Law School and Boston University School of Public Health experts and veterans' advocates who spoke at the annual Pike Conference, Oct. 29, 2010 in Boston.

"The VA's come a long way in the last few years, but there is still a lot of work that needs to be done," said conference panelist Paul Sullivan, a Gulf War veteran who heads the non-profit advocacy group Veterans for Common Sense. "We need more research, more treatment options, more doctors and mental health professionals… We [also] need facts and figures about the wars."

Sullivan joined fellow veteran Anthony Hardie and a line-up of BU School of Public Health professors at the conference to discuss the continuing challenges in research and treatment for troops who served in the 1991 Gulf War, as well as those now returning from Iraq and Afghanistan.

Chief among those challenges has been a 20-year battle, waged by veterans of the Gulf War, to get recognition and treatment for a cluster of debilitating symptoms known as Gulf War illness. Two years ago, a scientific panel directed by Roberta White, the conference keynote speaker and chair of the BUSPH Environmental Health Department, issued a landmark report affirming that neurotoxic exposures are causally associated with Gulf War illness. The U.S. Department of Veterans Affairs has since agreed to re-examine the disability claims of Gulf War veterans.

"So much time was squandered," said Hardie, who serves on the scientific panel. He said he and other veterans were told for years, "'There's nothing wrong with you guys. It's all in your head.'"

He called White "one of our leading champions" in studying the causes of Gulf War illness.

Michael Grodin, professor of health law, bioethics & human rights at BUSPH and of family medicine and psychiatry at BU School of Medicine, said he was especially concerned about troops with PTSD and other mental-health problems being re-deployed multiple times into the war zone. He said that while there has been progress in understanding PTSD, "I think we need to utilize many treatment approaches."

George Annas, chair of health law, bioethics & human rights at BUSPH and a professor at the BU schools of law and medicine, noted that the military is grappling with an increase in the suicide rate among active-duty soldiers. Recently, the Army announced two major research project aimed at trying to understand risk factors and examine which suicide-prevention programs are successful.

"What intervention programs work? We don't know much about that," Annas said. "In this case, we're back where we were with the Gulf War syndrome, in 1992 -- we recognize there's a problem, and now we need to figure out what to do about it."

Leonard Glantz, a professor of health law, bioethics & human rights, said suicide prevention is difficult in both civilian and military life, and that identifying risk factors among soldiers is challenging because the number of suicide cases is relatively small.

Sullivan's group, which has battled for data from the U.S. Department of Veterans Affairs, calculates that the VA's Gulf War, Iraq and Afghanistan patient count will reach 1.5 million by the end of 2014. Data obtained by the group shows that as of June 30, 2010, the VA had treated 594,000 Iraq and Afghanistan veterans -- up 29,000 from the previous three months. Of those, 295,000 were diagnosed with at least one mental health condition.