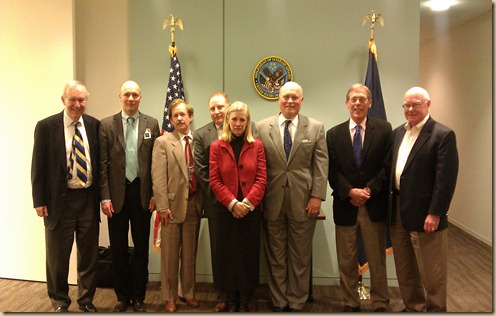 (91outcomes.com) -- As the sole Gulf War veteran on a panel otherwise composed of brilliant and accomplished scientists and medical doctors who essentially volunteer for this service to Gulf War veterans, I found this week’s meeting of the VA’s new Gulf War Steering Committee to have been of mixed results, but that many VA officials appear to be moving in a positive direction for Gulf War veterans still suffering the ill health effects of their military service two decades after the 1991 Gulf War.

Perhaps the most important topic of discussion surrounded the creation of a strategic plan to guide VA’s future Gulf War health research.

In the past, VA’s Gulf War research portfolio was fragmented, filled with gaps and overlaps, and excessively focused on stress and other issues unrelated to improving the health and lives of the approximately 250,000 GWI patients. Gulf War veterans justifiably were alienated and felt disregarded by a VA that spent hundreds of millions of dollars on “research” that resulted in absolutely nothing to offer GWI patients to help improve their health and lives.

This week’s meeting , however, suggested that the new VA, with its rapidly changing culture under Secretary Eric Shinseki that is aimed at advocacy and assistance for veterans, is genuinely trying to right the wrongs of the past.

Led by Dr. Joel Kupersmith, who oversees all of VA’s research programs, the Office of Research and Development (ORD) seemed open to most if not all of the Steering Committee’s recommendations on research content. VA’s ORD officials appeared to readily agree to the Steering Committee’s recommendation for an overarching mission for VA’s research program: To improve the health and well-being of Gulf War veterans while also seeking to learn the lessons necessary to help prevent similar health outcomes in the future.

While for many of us Gulf War veterans this is a no-brainer, for a VA long and justifiably despised by Gulf War veterans, this new openness comes as a breath of fresh air and the clear result of VA leadership based on open communication between Gulf War veterans, their medical and scientist advocates, and VA officials including those deep within the VA bureaucracy.

Much less positive at this week’s meeting were discussions with OPEIH, where the left hand and the ORD right hand still don’t appear to be able to work together. Even more disappointing is that despite the apparent positive changes at ORD, the OPEIH clearly still has a long ways to go.

An OPEIH-developed national survey of Gulf War veterans was highly flawed – so much so that the advocacy-oriented Research Advisory Committee on Gulf War Veterans’ Illnesses (RAC-GWVI) called for an immediate halt to the survey because it would do far more damage than good.

A leading representative from the Office of the Secretary, Jeff Peters (who attended and actively participated in the entire day’s meetings!), explained that the RAC’s recommendations had been received and a “neutral” third party had been brought in to develop a final recommendation for implementation.  The final result should be concluded in a few weeks, he said.

This process will be a true test of the commitment of the new VA.  As I said at the meeting, “the proof will be in the pudding” if the final survey instrument has the many corrections needed, or instead if it remains the OPEIH’s old-VA style effort focused heavily on stress, depression, and anxiety while leaving most important Gulf War health questions unanswered.

Most disappointing is that OPEIH officials appear to still cling to justifying their inappropriate and flawed efforts.

For the long term, it is clear that the VA’s environmental health (OPEIH) has a long ways to go in adapting to the new VA focused on improving Gulf War veterans’ health and well-being and helping to prevent similar health outcomes in the future.

During the last two years, I have developed a deep respect for VA’s top leadership, who are clearly aimed not only at doing right by veterans in resolving these longstanding issues from past wars, but also have the tenacity and specialized knowledge, skills and abilities to make the needed changes within VA so that they will in perpetuity and not just subject to reversal by neglect under the next Administration.

I for one wish the Secretary’s office every hope for success in dramatically changing the culture in the OPEIH and any other holdouts of the old VA, where decisions have been made without regard, respect, or value for Gulf War veterans or the Congressionally-directed governing role of the RAC-GWVI that represents them and has had improving Gulf War veterans’ health and lives as a core component of its charter since its inception.

More to come on other issues from the Gulf War Steering Committee in the coming days.