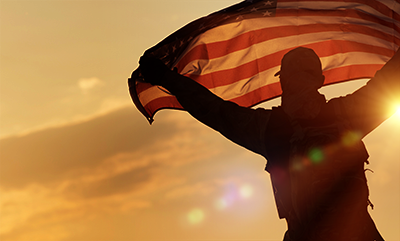 Twenty-five years after the first Gulf War, scientists still do not know the exact biological mechanisms that are making about one-third of the 697,000 veterans who served in the war sick.
But a new multi-institution study in the journal Neurotoxicology & Teretology, co-authored by a School of Public Health researcher, provides evidence that Gulf War Illness (GWI) stems from neuronal and glial injury affecting both the gray and white matter cells of the brain, and identifies serum autoantibodies that may prove useful as biomarkers of the illness.
The research team found “significantly elevated levels” of eight autoantibodies linked to certain central-nervous system cytoskeletal proteins (including tau, tubulin, myelin basic protein and glial fibrillary acidic protein) in a sample group of 20 Gulf War veterans, compared to a control group—a finding that suggests a “possible new avenue” for identifying an objective biomarker of Gulf War Illness. Glial fibrillary acidic protein—a marker of glial astrocyte injury—completely distinguished between the GWI cases and the controls in the study.
“These results confirm the presence of neuronal injury/glial activation in these veterans, and are in agreement with the recent reports indicating that 25 years after the war, the health of veterans with GWI is not improving and may be getting worse,” the authors said.
The serum autoantibodies “may prove useful as biomarkers of GWI, upon validation of the findings using larger cohorts in our ongoing multi-site study.”
Study co-principal investigator Kimberly Sullivan, a research assistant professor of environmental health and principal investigator on the Gulf War Illness Consortium project, which includes nine study sites, said the new study provides “objective, blood-based evidence of damage to the brains of sick Gulf War veterans. It indicates that, at least at some point, these veterans had a leaky blood-brain barrier that allowed these CNS proteins to enter their bloodstream and activate the immune system.”
Sullivan said she was hopeful that the work would lead to a simple blood test for GWI, and perhaps other toxicant-induced disorders, “if our larger, ongoing study shows the same promising results as this initial study.”
The complex of symptoms known as Gulf War Illness includes memory and attention problems, fatigue, chronic muscle and joint pain, headaches, persistent diarrhea, respiratory difficulties and skin rashes.
Past research has shown that exposure to pesticides, the nerve gas agent sarin, and ingestion of pyridostigmine bromide (PB)—prophylactic pills intended to protect troops against the effects of possible nerve gas—are associated with GWI and neurological dysfunction. These so-called “toxic wounds” resulted in damage to veterans’ nervous systems and immune systems, including reduced white and gray matter in veterans’ brains, past studies have shown.
Combined with prior findings, the new study indicates that alterations in the brain’s cytoskeletal proteins, as evidenced by circulating autoantibodies, appear to be associated with chronic neuro-inflammation and oxidative stress, which cause the chronic health problems reported by sick veterans.
There is no treatment for GWI, and veterans’ advocates have complained that the Department of Veterans Affairs has been reluctant to recognize the illness as a toxicant-induced disorder.
The new study found significant increases in the levels of some of the eight autoantibodies among GWI veterans, including a 9.27-fold increase for calcium—calmodulin kinase II (CaMKIII); a six-fold increase for glial fibrillary acidic protein (GFAP); and a 4.83-fold increase in tau protein. Those elevated levels are consistent with the veterans’ exposure during their deployments to compounds such as pesticides and sarin gas, the research team said. Similar effects have been found in GWI animal models.
The study was led by Mohamed Abou-Donia of Duke University Medical Center, with co-authors from: Beth Israel Deaconess Medical Center, Harvard Medical School, Zagazig University in Egypt, and Menoufia University in Egypt.
The Gulf War Illness Consortium, which has developed blood and stem cell repositories, recently received nearly $3 million in funding from the Department of Defense for four additional “New Investigator” studies aimed at identifying biomarkers and genetic risk factors involved in the illness. Sullivan said that utilizing the GWIC biorepositories will allow for faster results in the new research. The new studies include:
—Lisa Chedekel