U.S. Army veteran of the 1991 Gulf War Stanley Gibson, gunned down by police in Las Vegas last weekend, had service-connected adenoid cancer that had required five VA surgeries and left his jaw disfigured, according to news reports.  According to the Las Vegas Review-Journal:


As a veteran of the Persian Gulf War, the 43-year-old Las Vegas man had gone through five surgeries for a form of adenoid cancer that had left his jaw disfigured and had spread to a lung. He alleged his endless bouts with cancer were linked to his exposure to depleted uranium from armor-piecing rounds used by M-1 tanks.
He said the exposures occurred during Operation Desert Storm in the early 1990s, when he served with headquarters and headquarters company of the 1st Battalion, 327th Infantry Regiment.

Despite having been compensated at the 100 percent rate for the last 16 years, the VA inexplicably cut Gibson's VA monthly disability compensation checks nearly in half in August, leaving the very physically and mentally ill veteran even more desperate.


This police shooting of a very ill Gulf War veteran (which, as an important aside, should be carefully investigated for excessive use of force) should serve as a reminder of the myriad of outcomes that have resulted from a nation not effectively caring for the hundreds of thousands of seriously ill veterans of the 1991 Gulf War.


Yet another tragedy for the Gulf War veteran community.  Gibson was just 43.


LAS VEGAS — The 43-year-old Gulf War veteran gunned down by Las Vegas police in a weekend parking lot confrontation felt like his life was spiraling out of control and sought help from a veterans advocate days before he was killed.

Stanley Lavon Gibson suffered from cancer he blamed on his Army service, faced eviction from his home, and was due for sentencing on an assault charge after an argument with a Veterans Affairs doctor.
2
Comments
inShare

He also was taking painkillers, antidepressants and anxiety medications.
After recently having his disability payments reduced, Gibson called the Las Vegas Review-Journal seeking help.
“I’m a desperate man. I’m very desperate,” he said in a Nov. 12 voicemail message to a reporter about fears that he and his wife would lose their home.
Gibson was put in touch with a veterans advocate, who told the newspaper he talked to Gibson last week and planned to start reviewing his case Monday.
But Gibson was shot by an officer early Monday after a report of a man breaking into a northwest Las Vegas condominium. The Review-Journal reported (http://bit.ly/vwfSF1) Gibson may have been confused and trying to find his way home to an unfamiliar apartment where he and his wife moved Dec. 1.
Police said Gibson was unarmed, but that he rammed his vehicle into police cruisers that pinned his Cadillac in a parking lot.
Police supervisors decided to use a beanbag shotgun to shoot out at least one window of Gibson’s vehicle to reach him. But when an officer fired the beanbag gun, another officer fired multiple bullets into Gibson’s vehicle, killing him, the newspaper reported.
Clark County Sheriff Doug Gillespie promised an investigation, and refused to speculate about why the officer opened fire. Department spokeswoman Carla Alston called it “speculative” and “premature” to comment on details before the probe was complete.
Gibson’s wife, Rondha, said her husband had run out of anxiety medication and was prone to paranoid delusions and anxiety.
Just two days before the shooting, police took Gibson to jail on a resisting arrest charge after he screamed at passing cars and accused his wife of conspiring against him.
Rondha Gibson said police told her Stanley Gibson would be seen by a doctor on a 72-hour psychiatric evaluation, but he arrived back home Sunday. He told his wife he had taken out the trash and didn’t remember going to jail.
Gibson’s Army discharge shows he separated from the service in 1992 as a specialist, after three years of service with headquarters and headquarters company of the 1st Battalion, 327th Infantry Regiment.
Department of Veterans Affairs medical records show Gibson underwent five surgeries for a form of adenoid cancer that left his jaw disfigured and had spread to a lung.
He alleged his cancer was linked to his exposure during Operation Desert Storm to depleted uranium from armor-piercing shells used by M-1 tanks.
The VA records show his cancer was diagnosed in 1995 and he was rated 100 percent disabled. But the VA’s regional office in Reno told him in an Aug. 8 letter that his service-connected disability rating had been lowered to 80 percent. His disability payments were then reduced.
About the same time, a friend wrote to the VA, saying Gibson suffered from anxiety and depression and had tried to commit suicide twice this year.
An Aug. 9 note from a doctor at the VA Southern Nevada Healthcare System’s North Las Vegas clinic said Gibson had recurrent cancer, should be considered fully disabled and should have a guardian appointed for his safety.
Several weeks later, security officers arrested Gibson during a confrontation with another VA doctor. Gibson pleaded guilty in U.S. District Court in Las Vegas to one count of assaulting a federal employee and was scheduled for sentencing in February.
Veterans advocate Joe Tasby, a decorated Vietnam veteran and American Legion post commander, told the Review-Journal he spoke with Stanley and Rondha Gibson last Thursday about their concerns with the VA’s handling of his case. He planned to review Gibson’s VA and military records.
“I told him, ‘I’m working with you. Just give me a little more time,’” Tasby said.
VA Southern Nevada Healthcare System chief John B. Bright offered condolences to Gibson’s family and said officials would review Gibson’s case “to see what we can figure out.”
“Any way you look at this, it’s a tragedy,” Bright said.
___
Information from: Las Vegas Review-Journal, http://www.lvrj.com 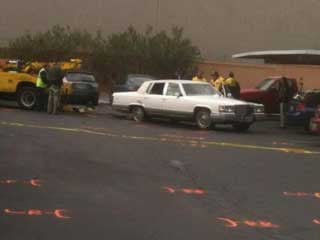 Four Las Vegas Metro police officers involved in the shooting of a Gulf War veteran at a condominium complex on the city's northwest side were identified Wednesday.
They are 34-year-old Officer Jesus Arevalo, 31-year-old Officer Malik Grego-Smith, 45-year-old Sgt. Michael Hnatuick and 40-year-old Lt. David Dockendorf.
The four were responding to reports of a burglary at the Alondra condominiums late Sunday night when they encountered 43-year-old Stanley Gibson.
Gibson was stopped in his vehicle between two Metro cruisers when he was shot multiple times. Police said Gibson attempted to ram a cruiser before the shooting.
In a news conference on Monday, Metro Sheriff Doug Gillespie said he would personally respond to questions about the shooting after the officers involved had given their statements.
According to police, Arevalo joined the department in February 2002; Grego-Smith joined in August 2008; Hnatuick joined in September 1988; and Dockendorf joined in July 1998.