MOAA appreciates the inclusion of a provision in S. 1950 that repeals the unfair 1% COLA Cut of the earned pensions of working age military retirees established in the Balanced Budget Act and a number of other major MOAA priorities for veterans the legislation addresses. 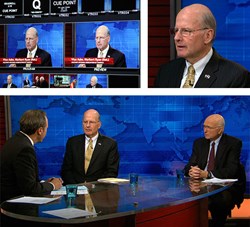 Alexandria, VA (PRWEB) January 17, 2014
Military Officers Association of America (MOAA)announces its support of the Veterans Health and Benefits Improvement Act, S.1950, the Comprehensive Veterans Health and Benefits and Military Retirement Pay Restoration Act of 2014.
“This legislation, based primarily on the bi-partisan Senate Veterans Benefits Omnibus, S. 944, offers comprehensive and much needed solutions for our returning warriors, veterans, survivors and family members,” MOAA President Vice Adm Norb Ryan said.
“MOAA deeply appreciates the inclusion of a provision in S. 1950 that repeals the unfair 1% COLA Cut of the earned pensions of working age military retirees established in the Balanced Budget Act,” he added.
The legislation also addresses a number of major MOAA priorities for veterans including:
“These and other measures provide a strong foundation for our nation’s veterans after more than a dozen years of war in Iraq and Afghanistan,” Ryan stated.
“MOAA is very appreciative of the growing support in both chambers to repeal the grossly unfair COLA cut on earned military retirees’ pensions. The means of accomplishing that objective is up to leaders in both parties and we strongly support a bi-partisan solution as soon as possible to restore the full pensions of those who have dearly earned them in service to the nation,” Ryan concluded.
About MOAA:
Military Officers Association of America (MOAA) is the nation’s largest officers association with more than 380,000 members from every branch of service, including active duty, retired, National Guard, Reserve, and former officers and their families and survivors. MOAA is a nonprofit and politically nonpartisan organization and an influential force in promoting a strong national defense. MOAA represents the interests of service members and their families in every stage of their lives and careers, and for those who are not eligible to join MOAA, Voices for America’s Troops is a
nonprofit MOAA affiliate that supports a strong national defense. For more information, visit http://www.moaa.org orhttp://www.voicesfortroops.org/.
Members of the news media who wish to be added to our media distribution list for MOAA news releases, please contact requestnews@moaa.org. Visit MOAA’s Multimedia & Press Room at http://www.moaa.org/media/default.htm.