UPDATE:  The amendment passed, narrowly, by a vote of 66-32.  These medical research programs have survived another attempt to destroy them.

The roll call vote is posted below.


Please call your U.S. Senators *this afternoon* to ask they Support Senator Richard Durbin's Amendment #4369 to save the Gulf War Illness CDMRP and other treatment research. 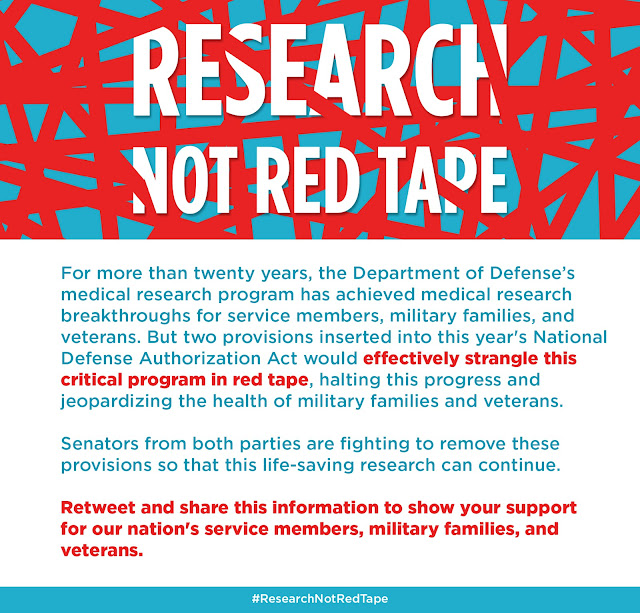 3. Text of S. 2943, the FY17 National Defense Authorization Act (NDAA), abridged to show the two sections to be removed by S. Amdt. #4369.    ***(Due to a ScribD programming error, the highlighted bill text is only visible if you click on "download" the document and then read the PDF in that way.)***

The undersigned organizations and institutions write in opposition to Sections 756 and 898 of S. 2943, the fiscal year 2017 National Defense Authorization Act, which would prohibit funding for medical research at the Department of Defense (DoD) unless such research meets certain narrowly defined criteria related to military relevance.  We urge you to support amendments that we expect to be offered during Senate floor consideration that would strike this language from the bill.

We oppose Section 756 because it is unnecessary and, if enacted, could jeopardize funding for research activities that have broader relevance to the U.S. military, including the health and well-being of military families and veterans, and the efficiency of the military health care system.  We oppose Section 898 because it would place unnecessary and burdensome acquisition compliance and auditing requirements on programs that are already serving the taxpayer well.

The medical research programs at DoD directly impact the health and lives of the U.S. military, including combat veterans and their families.  They include important medical research programs related to several forms of cancer and other disorders.  Grants awarded through these programs have led to breakthroughs on nerve regeneration and traumatic brain injury (TBI) and post-traumatic stress disorder (PTSD) – key developments favorably impacting our newest wounded warriors.  Other programs provide groundbreaking research on psychological health, Gulf War Illness, spinal cord injury, and hearing and vision loss (which comprise a significant portion of current battlefield injuries). Many of these diseases occur at greater rates in those who have served in the military.

Defense health research grants undergo rigorous merit review from both scientific and consumer review panels, and are awarded competitively based in large part on their innovative qualities as well as scientific merit and relevance to the U.S. military.

During floor consideration of S. 2943, we urge the Senate to support amendments to strike this language from the bill and also support continued investments in the medical research programs at DoD.