Ill Gulf War Veteran David LaShell of Richmond, Indiana had his picture taken (below) with VA Secretary Eric Shinseki in the elevator on the way up to the RAC meeting at which yesterday's landmark 2014 RAC Report was presented.   What shocked Gulf War veterans attending the meetings and who had traveled at their own expense from across the country was that Shinseki -- who was clearly present in the same building as the meeting was being held, as shown in this photo taken right before the start of the meeting -- chose not to come back down the same elevator from his high level office to attend any portion of the RAC meeting. 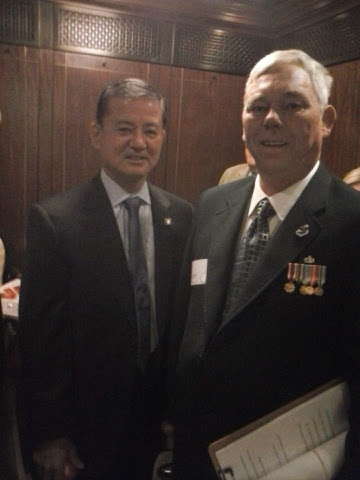 PHOTO Courtesy of David LaShell:  Smiling VA Secretary Eric Shinseki and Disabled Gulf War Veteran David LaShell in the elevator at VA headquarters.  LaShell got off the elevator moments later to attend the public meeting where a landmark Gulf War Health Research report was to be presented to Shinseki.  LaShell invited Shinseki to the RAC meeting.  Shinseki instead continued up the elevator to his high level office and was never once seen during two days of the Committee's public meetings.

Shinseki is the first VA Secretary in history not to be present to receive a RAC major report.  Legislation is pending in Congress, H.R. 4261, that would require Shinkseki and future VA Secretaries to attend  meetings of the RAC, a federal advisory committee statutorily mandated to advise and make recommendations to VA on Gulf War health research.

In the more than five years since Shinseki has been VA Secretary, he has not attended a single RAC meeting, a fact that is leading to mounting criticism in the Gulf War veterans community.  All previous VA Secretaries were regular attendees at RAC meetings.