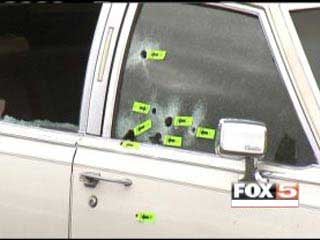 Bullet holes were left in Stanley Gibson's car following his death.
LAS VEGAS (FOX5) -
The shooting death of a disabled Gulf War veteran by Las Vegas Metro police will be the first case under review Thursday at the inaugural meeting of Clark County's Police Fatality Fact-Finding Review panel.
Clark County plans to air Thursday's 9 a.m. hearing on its television channel and stream the event on its website.

District attorney weighs in on new police fatality review
Grand jury won't seek indictment against officer in deadly shooting
Metro releases sheriff's internal address on Stanley Gibson shooting
ACLU reacts to newly released OIS details
Police release timeline of officer-involved shooting
Officers involved in shooting of vet identified
Widow: Police arrested husband before fatal confrontation
The review panel was formed in January as a replacement for the controversial Coroner's Inquest process, which determined whether an officer's actions were justified in civilian deaths.
Former judge and Clark County District Attorney Stew Bell will preside over the panel, with attorney Tony Sgro acting as ombudsman for the family of Stanley Gibson. Gibson, 43, was shot and killed during a standoff with police in December 2011.
Authorities said Gibson refused to leave his car after he was pulled over by Metro police officers. He was shot by Officer Jesus Arevalo while sitting in the vehicle.

I hope this review is more than just a dog and pony show. I was in Las Vegas visiting my mother when this shooting occurred and it was all over the news for two weeks.

They showed the entire episode on tv and it turned my stomach every damn time.

Stanley Gibson had been treated at the Las Vegas VAMC for mental health issues. As is typical, they ran him through a gamut of medications and the VBA ended up cutting his disability. This was all according to his surviving wife.

To say Gibson was in a "standoff" with police makes it sound like Mr. Gibson was holed up in a bunker firing rounds at the cops. In reality, Stanley Gibson was driving slowly through a large apartment complex. He was mentally confused and could not find his own apartment. Of course, someone saw a black man driving through a residential area like he was scoping it out and called the police.

When multiple police vehicles arrived on the scene, the police blocked in Mr. Gibson's car so he couldn't drive off. He refused to get out of the car and told the police he was just trying to find his home.

Finally, out of desperation, Mr. Gibson gunned his car but his tires simply spun and smoked due to the police car that was blocking him in.

The police decided to escalate the situation which was unnecessary in my opinion. There were several police officers surrounding Mr. Gibson's car all with handguns, rifles or shotguns pointed at him.

The Sergeant on the scene decided that shooting a bean bag round out of his shotgun through Mr. Gibson's front car window was the way to end the ordeal.

When the Sergeant shot the bean bag round, the windshield of the car exploded. That was when Officer Arevalo, in his infinite wisdom, shot seven rounds into the back of Mr. Gibson's head from his position behind the car.

Seven Rounds. To disable a man sitting, unarmed, in his car and in an obvious mental crisis.

Frankly, as a soldier and a former police officer myself, they should hang Officer Arevalo up by his balls and let us use him like a pinata. It would be far less than he deserves for the senseless and completely unnecessary killing of one of our brothers. A brother who just needed help in finding his home and his wife after the VA let him down.