Editor’s comment:  This study captures the experience of many ill Gulf War veterans, who, at best, have frequently had their symptoms poorly understood by clinicians due to mixed and flawed VA and DoD messages about Gulf War illnesses, and, at worst, outright ignored our discounted. 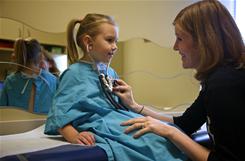 Dr. Megan Wills Kullnat, a fourth-generation physician, communicates with a new patient at her pediatric practice.

(USA TODAY) - Doctors and patients alike say that when they communicate well, healing goes better, and it can even make the difference between life and death.

But a national survey of doctors and hospitalized patients finds that, in reality, effective communication often is sorely lacking.

Only 48% of patients said they were always involved in decisions about their treatment, and 29% of patients didn't know who was in charge of their case while they were in the hospital.

"That's terrible," says Beth Lown, medical director of the Schwartz Center for Compassionate Healthcare at Massachusetts General Hospital, which commissioned the survey by Marttila Strategies in Boston. These patients "are orphans" in the hospital, she says.

Eighty-one percent of patients and 71% of doctors agreed communication made a difference in "whether a patient lives or dies," according to the survey of 500 doctors and 800 patients.

"So there's a disconnect between what people say they want and what's happening," says Gregory Makoul, chairman of the American Academy on Communication in Healthcare.

Emphasis on better communication has increased in recent years as the medical community has become more aware of its effect on patient healing. Since 1995, U.S. medical students have been required to get training in communication skills. And in 2005, the United States Medical Licensing Exam began to include testing on interpersonal and communication skills.

Communication skills and high patient-satisfaction scores can give hospitals a competitive edge as well as reduce malpractice claims, says Debra Roter, a professor at Johns Hopkins University in Baltimore.